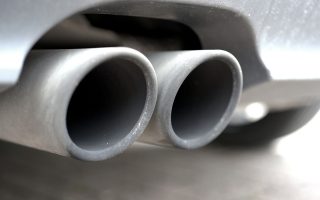 If cities act on the recommendations of the Imperial College of London, you may soon be seeing curved barriers installed along city streets. Researchers at the noted college recently discovered that barriers curved toward the road could help to limit pollution on sidewalks.

According to the researchers, air pollution can accumulate along sidewalks due to air currents that move pollutants from the street. In some cases, the pollution can get trapped and linger in areas with little air movement, creating hazardous air quality levels. Even when this doesn’t happen, though, pollutants being blown onto sidewalks from the street present a health hazard for pedestrians and cyclists on the roadside.

To address this problem, researchers began investigating the possibility of using curved barriers along roads to deflect air pollution away from pedestrians. The idea was inspired by roadside barriers used in other parts of Europe to reduce noise pollution from traffic.

According to the findings presented by the researchers, installing these curved barriers rapidly improved air quality on sidewalks and in roadside areas. The barriers reflected air currents from the road back toward vehicles, reducing the amount of particulate matter that reached the sidewalk.

These barriers represent a simple and inexpensive way to reduce air pollution exposure in busy cities. By installing them, cities like London would be able to provide cleaner, healthier air to those who commute by walking. This kind of innovative approach to the problem of air pollution is extremely important, as the health impacts of low air quality call for immediate solutions. Cost and difficulty, though, often foil more complicated solutions. Since many cities have some kind of barrier between sidewalks and roads anyway, this solution would simply require updating an existing piece of city infrastructure.

Although the problem of urban air pollution is a complex one that will take coordinated efforts to address, there are some things you can do to protect yourself today. One of the best solutions is to use a home air purifier that can remove common pollutants from the air your breathe in your house. With a good air purifier, you can control your home air quality, though you’ll still be exposed to outdoor pollutants whenever you leave home.

You can also limit your air pollution exposure by avoiding outdoor activity during peak traffic times. If you’re living in a crowded urban area, it’s best to avoid being beside a street during rush hour. These peak traffic times are the worst for air quality, though ideas like the curved barriers developed by Imperial College could soon reduce the risk. Until these ideas are adopted, though, it’s best to avoid crowded streets when traffic is at its worst.

Have more questions about air quality and how an air purifier can help you reduce pollutants in your home? We’re here to help! Feel free to contact us with your questions, and we’ll be happy to help you find the right air purifier for your needs.

Foods that can help prevent asthma symptoms
These are a few things a person should consume to help prevent asthma symptoms.
Could the Amish lifestyle reduce the likelihood of developing asthma?
According to a new study, the Amish lifestyle might offer protection from asthma symptoms.
2 ways that eating can help alleviate allergy symptoms
Here are a couple of ways you can reduce allergy symptoms through what you eat.Â
Air pollution linked to higher stroke risk
Living in a heavily polluted area may increase your risk of a stroke.
Study: Hospital admissions among asthmatic children decline thanks to new smoke-free law in U.K.
The number of children admitted to the hospital for asthma-related reasons declined a whopping 12.3 percent in the United Kingdom the year after a new law that banned smoking in enclosed public places went into effect.