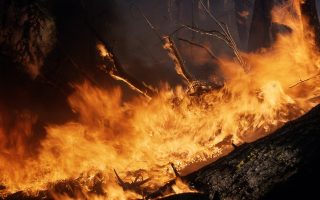 Although there are few things that smell better than wood smoke on a cool evening, researchers are increasingly realizing that burning wood can have disastrous health effects. While the occasional campfire probably won’t harm you, being exposed to huge amounts of wood smoke on a daily basis is another matter altogether. Unfortunately, that’s exactly what millions of residents of the Western United States are facing right now as a result of raging wildfires. Here’s what you need to know about the health effects of wood smoke and how they relate to America’s intensifying wildfire problem.

How Does Wood Smoke Affect Your Health?

According to the EPA, wood smoke is a source of several harmful pollutants. These include benzene, formaldehyde and polyacrylic aromatic hydrocarbons. In addition, burning wood can produce large amounts of fine particulate matter (PM 2.5).

Together, these pollutants can make overexposure to wood smoke quite dangerous. The chemical compounds and PM 2.5 together can trigger asthma attacks, lead to bronchitis and exacerbate problems caused by COPD. Children, older adults and those with these underlying health conditions are considered most at risk, but wood smoke pollution can negatively impact people of all ages and demographics. In addition, PM 2.5 has been linked to more serious conditions, including heart failure and strokes.

It should be noted, though, that not all wood smoke is the same. Most of these harmful pollutants result from incomplete combustion. When wood is burned completely in a high-efficiency wood burning stove, for example, it will produce fewer of these compounds. Dry, seasoned wood is also less dangerous since it tends to burn more completely than green wood.

The Massive Problem of Wildfire Smoke

While wood smoke on its own is a problem, the enormous clouds of smoke produced by wildfires take that problem to an entirely different level. In heavy wildfire seasons, hundreds of thousands or even millions of acres of timber can burn in the space of a few months. The resulting air pollution lowers air quality and can lead to long-term health issues and even deaths.

For example, a Stanford research team estimated that California’s heavy 2020 wildfire season resulted in between 1,200 and 3,000 smoke-related deaths. That number is more than 50 times the official tally of deaths directly caused by the fires. Worse still, this estimate represented only the population of people who were 65 and older, who are more susceptible to smoke-related illness.

In 2021, the West is facing similarly severe wildfire conditions. As of the time of this writing, approximately 300,000 acres across 6 states were actively burning. While some fires were near full containment, others were raging virtually unchecked. As a result, clouds of dangerous smoke can now be found across several states, leading to severe health risks for many of the Western US’s residents.

If you live in one of the affected areas, one of the best things you can do is to remain indoors as much as possible and use a home air purifier to maintain the air quality in your home. Since there’s little you can do about the quality of the outdoor air, controlling indoor air quality as tightly as possible is your best bet. Fortunately, we carry a complete lineup of air purifiers for wildfire smoke that can help you keep the air you breathe inside clean.

Have questions about which air purifier is right for your home and situation? We’re here to help! Feel free to contact us, and we’ll be happy to provide you with answers and personalized product recommendations based on your needs.