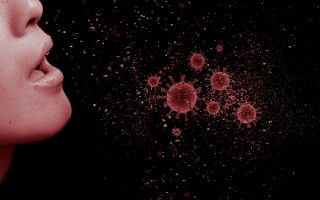 Thanks to the COVID-19 epidemic, people are being more careful than ever before when selecting products to keep them safe from viruses and bacteria. One of the questions we see most often is how BetterAir probiotic air purifiers stack up to UV units when it comes to combating viruses and bacteria. In this article, we thought we’d go over how these two technologies work and what each of them does to keep you safe from harmful pathogens. Keep in mind that the information presented here is not specific to COVID-19, but instead a general look at how these two purification technologies target dangerous germs across the board.

First, Let’s Look at How Bacteria and Viruses Spread

Before going into the differences between UV germicidal lamps and probiotic air purifiers, it’s important to understand how bacteria and viruses actually spread from person to person. Generally speaking, common pathogens are spread when an infected person coughs, sneezes, talks or breathes. These activities produce small droplets of humidity (the same phenomenon that lets you see your breath in cold weather) that can contain viruses.

The emission of these tiny spheres of moisture can take two different forms. Some, called large droplets, are heavy enough that they fall to the floor before they evaporate. Although there is some dispute over what size a droplet has to be before it will fall in this way, most experts estimate any droplet greater than 20 micrometers will do so. Because they are deposited on surfaces, these larger droplets are often responsible for people picking up infectious diseases by touching contaminated surfaces.

Very small droplets, on the other hand, evaporate before they have a chance to fall, allowing pathogens to become suspended in the air. This form is known as a bioaerosol and is the mechanism behind airborne disease transmission.

It should also be noted that surfaces can become contaminated directly. When someone with an infection touches a surface, he or she may transfer pathogens from a hand to that surface. This transmission pathway also accounts for people catching diseases from contaminated surfaces.

Airborne vs. Surface Transmission: Which Is the Larger Threat?

Now that we understand how bacteria and viruses spread, let’s look at which mode of transmission poses the larger threat. On the surface, you might think that airborne transmission is more concerning, since it’s possible to pick up an infection just by breathing normally when there are bioaerosols in the air. With that said, it’s estimated that 80 percent of infections are acquired from either contaminated surfaces or direct physical contact with an infected person. As a result, surface transmission definitely needs to be taken into account when deciding how to control pathogens in a given space.

BetterAir Probiotic Air Purifiers and UV: What Targets What?

With all of the background information out of the way, we can finally dive into the differences between BetterAir probiotic air purifiers and UV models for germ control. Here’s what you need to know about each of these technologies and how they impact germs transmitted in different ways.

The problem, however, is that direct exposure to concentrated UV light is also harmful to humans. Air purifiers that use UV germicidal lamps don’t have a negative impact on human health because the light is purely internal, but this also means that only germs in the air being drawn through the body of the air purifier can be neutralized. As a result, UV technology is quite effective against airborne bioaerosols, but doesn’t have any effect on the germs deposited on surfaces that account for the majority of infections.

In contrast to UV technology, BetterAir units create a spray of probiotic blend that is deposited onto surfaces, where the probiotics can compete with harmful pathogens and reduce the risk of transmission from those surfaces. In this way, BetterAir’s technology goes after viruses and bacteria in the places where they’re most likely to infect you. By reducing pathogen load on surfaces, BetterAir probiotic air purifiers help to keep you safer from most common germs.

Because they independently target two different transmission pathways, an ideal scenario would be to use probiotics as a surface cleaner and a UV purifier to kill airborne pathogens. If you have to choose between the two, though, BetterAir probiotic units are more effective at targeting germs in the places where you’re most likely to pick them up.

Contrary to popular belief, probiotics can also be deployed in larger spaces, such as offices and stores, where large numbers of people are likely to transmit germs by touching shared surfaces throughout the day. Two large-space units are made by BetterAir, the BA-1200 and BA-1800. The BA-1200 model covers spaces of up to 13,000 square feet, while the BA-1800 covers an impressive 45,000 square feet. Thanks to these higher capacity units, the benefits of probiotic air purification and surface cleaning can be leveraged in commercial spaces.